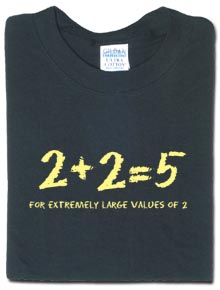 In keeping with the t-shirt-themed-previous-posting, I thought I would begin this entry with a snapshot of a shirt that I received for Christmas. Pretty awesome huh? Jealous? Well if you are, you can click on the picture and you will be whisked away to the website that sells them (I suppose even if you aren’t jealous, that last statement still holds). They will be happy to take your money and in exchange provide you with a shirt of your very own.

You’ll notice when you go to the website (thinkgeek.com) that they make a reference to a quote from Bishop George Berkeley. In fact, this reference is what initially sparked my interest in the shirt. Berkeley was an Irish philosopher practicing during the early 1700’s (following on the heels of his quite famous British predecessor John Locke). What’s more, Berkeley was a committed Christian, holding the position of Bishop of Cloyne.

I was introduced to the Bishop during a History of Philosophy class. In fact, I wrote a paper on his philosophy of mathematics. One of his most well known works is entitled: The Analyst, subtitled: “A Discourse Addressed to an Infidel Mathematician,” sub-subtitled (?), “Wherein it is Examined whether the Objects, Principles, and Inferences of the modern analysis are more distinctly conceived, or more evidently deduced, than Religious Mysteries and Points of Faith.”

Wow. And I thought the title for my paper on mathematics and process theology was impressive.

You can read The Analyst here.

This work is essentially a critique of the foundations and principles that Sir Isaac Newton (and Gottfried Leibniz) used to develop Calculus. Berkeley thought Newton’s reasoning was as sound as saying 2 + 2 = 5 for extremely large values of 2, hence the t-shirt. And you know what? Berkeley’s critique was a correct one. That’s not just my opinion, it was the consensus of mathematical community. The Analyst was a vital text in driving the revision and development of Calculus that we use and teach today.

The sad part is that while the importance of this work is known to most mathematicians and historians (at least the serious ones), on a popular level The Analyst is largely ignored. I’m quite sure that even those students who loathed math class remember the name Isaac Newton and can generally credit him with developing the concepts of Calculus. I’m also quite certain that, if polled, the same people would attribute Berkeley with the founding of a city in California. (Side note: the city in California is indeed named for the same George Berkeley, but he had nothing to do with its founding… what with being an Irishman who died in 1753).

All Berkeley’s endeavors, according Genevieve Brykman, were directed to the defense of what he saw as the most important truth – that we are in a constant and immediate relationship of dependence on God. Berkeley’s philosophy… was a provisional instrument in the service of his overriding apologetic aim.[1]

George Berkeley was the embodiment of what it means to think about mathematics Christianly and I think that it is important for us (those Christians who want apply their faith to the serious contemplation of mathematics) to give a more careful consideration of his work than we have previously given it.

I hope to provide some snippets from my paper in future posts.

Be sure to purchase the right apparel for all your Pi Day needs. 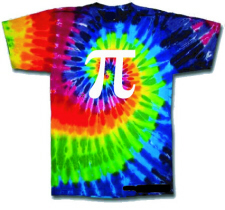